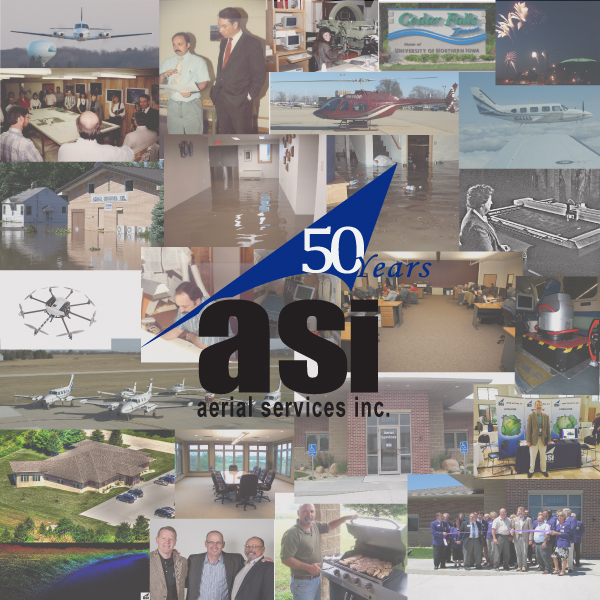 A film camera, 4 employees and a vision.  Aerial Services, Inc. was no longer a dream but a reality.  On June 5th, 1967 the company was founded by Robert F Walden, Richard Walden, Fred Debe, and J.R. Holmes.  54 years later ASI continues to exceed our clients’ expectations by combining sophisticated sensors and an experienced team of professionals to deliver high-quality geospatial solutions.  Much like the technology ASI uses, the company has evolved over the past 54 years.  Join us as we enjoy reliving a bit of our history.

Explore our interactive timeline below.

ASI purchases their first stereoplotter, the Wild B8. Now for the first time paper and mylar maps are made.

This logo was introduced in 1974 when Paul Allee purchased the company.  The logo would eventually receive an upgrade to the wing we still use today.

In 1984 Aerial Services was one of the first geospatial companies to install and use DEC PDP computer mapping systems alongside traditional analog stereoplotters. The “digital age” at ASI began here.

Gary G. Brown, a long-time employee, purchased the company in 1988 and with time became a well known national advocate for Aerial Services. He boldly led the firm into the personal computing age.

The new revolution of desktop computing makes an impact in mapping operations. Although ASI had been using computer mapping since the PDP days, this was our first use of a PC-based mapping system.

As computing technology evolves, ASI leads the nation and becomes one of the first mapping companies to purchase a digital analytical stereoplotter (Zeiss P3). Maps are now drawn 100% on a computer screen. Things begin to change rapidly now.

Aerial Services is chosen to beta test Autometric’s new OrthoMAX Softcopy stereoplotter. This “computerized stereoplotter” replaced the analog stereoplotters in use for over 50 years. Big, heavy stereoplotter instruments reach the end of their useful life.

This was huge! Now we can make “digital” orthophotos using computers. This is one of the underlying technologies that we take for granted today and makes Google Earth possible.

GPS is added to ASI’s sophisticated mapping technologies. We are now able to survey positions on earth from space. We take this for granted today, but should never forget the significance  of this quantum technological leap. It changed many things!

On March 1st, 1997 ASI launched our very first website, www.asi-gis.com. We’re on the web. Few people imagined how transformational the web would become to business and families. Google is still years away. Facebook man is still a little boy.

What better way to start the new century. Kirk Fisher, Walter Ertz, and Mike Tully purchased the company from Mr. Brown. These three professionals were long-time employees of Aerial Services and begin to shepherd the company into the future.

For the third time the ASI logo is upgraded to the wing we still use today. People stop laughing at how our old logo showed our planes crashing into the ground!

ASI is recognized by the U.S. Department of Agriculture’s Farm Service agency as its small business contractor of the year.

ASI wins the Geospatial Excellence Small Project award in 2007  for their work on the E-doc GIS project.

In June of 2008 the company’s location in northern Cedar Falls was destroyed by a 500-year flood of the Cedar River.  The flood caused nearly 64 Billion dollars in damage in Iowa alone. The Cedar River invading our building Our conference…

ASI turned the disastrous flood into opportunity. A new office building was built in the Cedar Falls Technology Park to accommodate the growing business.   More Photos of New Office Below Front Entrance Aerial view of our office in Technology Park…

ASI adds their first LiDAR high-density corridor sensor to their growing arsenal of mapping technology. These new sensors, coupled with modern computing technology, facilitate accurate mapping of the earth’s surface at aircraft speeds and orders of magnitude faster and more…

The utility of LiDAR in remote sensing and mapping continues to grow. ASI brings even better technology to service our clients. With two LiDAR sensors, ASI is capable of taking on any type of project with the highest accuracy possible.

After weeks of hard work and plenty of caffeine, our creative and motivated professionals create a poster to describe an innovative remote sensing project that ASI worked on with Farm Nutrients. This project won the “Excellence Award” at the MAPPS Geospatial Products and Services…

Aerial Services, Inc. was one of a few small business firms in the nation to be awarded a GPSC3 contract by the USGS.

ASI was awarded the Geospatial Products and Services Excellence Award “Grand Award” for “Project of the Year” and in the GIS/IT category. The Earth On Demand ™ project enables the distribution of geospatial data (raster & vector) in near real-time…

What a journey the past 50 years had been!  Technological changes have been tectonic. This group of professionals are passionate about the work we do for our clients. ASI has been delivering geospatial solutions with speed, accuracy and innovation to…

The project from a 30,000′ view is about bringing historical scanning to life so the poster itself is a film scan with true fiducial and other identifier markings.

Longevity with the USDA

Aerial Services, Inc. has been a trusted partner to the USDA for over 20 years.