A few Aerial Services employees have reached a milestone anniversary! Kirk Fisher has been working with ASI for 30 years! Kirk started in January 1986. Mike Tully hit the 20-year mark on March 4th! 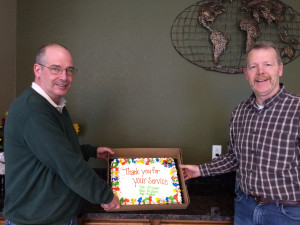 Kirk Fisher (left) and Mike Tully (right) pose for a picture after the ASI Quarterly Employee Meeting, where their milestone anniversaries were recognized.

Kirk began his career at ASI after Rath Packing went out of business. He started out doing compilation editing and then got interested in the aviation side. While pursuing a private pilot’s license he worked as a camera operator. After a few years, he began flight planning, scheduling and eventually running the Flight department.

Walter Ertz, co-owner of ASI comments, “Kirk is a person of few words, his actions speak for themselves.”

Mike began his journey with ASI as System Administrator working on a project to automate mapping operations. Then he worked on using new technology to color balance county wide orthos in Ohio. Mike also took over and managed the IT department, as well as the Marketing department.

In 2000, Kirk and Mike partnered with Walt to purchase the company. Kirk Fisher became the Chief Financial Officer (CFO) and Vice President of Operations; Mike Tully the President and CEO; and Walter Ertz the Vice President of Geospatial Solutions.

Aerial Services would like to thank Kirk and Mike for their diligence and hard work for all these years. They have continually contributed to the growth of Aerial Services.

Amanda Hoppes is the Marketing Manager at Aerial Services. With a BS in Technical Communications, she focuses on technical writing and marketing strategies. Amanda's goal is to 'wear many hats' within the company she works for. She believes having employees who know not only their job, but others' as well, help build a strong and successful business.
More by Amanda Hoppes

Leave a reply Click here to cancel the reply

This site uses Akismet to reduce spam. Learn how your comment data is processed.